It has been 100 years since the Amsterdam School style was born. Therefore Amsterdam organizes several events in town to celebrate this.

On Saturday 10 and Sunday 11 September, you can explore all of these wonderful examples of the Amsterdam School once again during Amsterdam Heritage Days. During this weekend, you can visit 60 monuments for free:
50 Amsterdam School monuments and 10 other architectural gems. These buildings are typical of Amsterdam and must-sees, such as the Burgerweeshuis. For those who can’t get enough of the Amsterdam School style, there is an extensive program filled with walks, talks, boat trips, cycling tours, exhibitions, workshops, an evening program and a junior program. I am always very curious to find out what’s behind all these undulating facades. With that in mind, I advise everyone to visit as many monuments as possible during Amsterdam Heritage Days.

Let yourself be surprised by this fanciful Amsterdam style!

The Amsterdam gay pride  is extra large this year, because Amsterdam is hosting Europride 2016. Europride lasts for 3 weeks, with the main parties and events in the last weekend.

The first real party night of the Pride weekend is on Friday August 5. Gay street parties will take start at Amstel,  Rembrandtplein, Zeedijk and Paardenstraat (Women). The famous Reguliersdwarsstraat won’t participate with an official party but will have an intimate street party instead.

There will also be a streetparty by Prik, therefore the whole Spuistraat will be blocked for traffic to make place for the Prik stage. At the Westermarkt the Drag Queen Olympics will be held. A Drag Queen sporting affair with events including the ‘Handbag Throw’, the ‘100m Stiletto Sprint’ and the ‘Tug-of-War’. Last year’s competition saw 26 participants compete in the Dutch Capital, with many world records shattered.

Drag Queen competitors wanting to take part can turn up from 5pm at the Homomonument with wig and heels.

The highlight of the Amsterdam Gay Pride weekend is the famous Canal Parade on Saturday August 6. Where most parades use trucks, Amsterdam has boats!

75 pride boats will sail from 1 till 6 PM through the Prinsengracht and Amstel river, watched by over 300.000 spectators every year.

Next to the same gay streetparties as Friday, which start already early afternoon, Saturday night is party night.

Sunday August 7 is the traditional Pride Closing Party on a massive stage at the Rembrandtplein. This takes place late in the afternoon and early in the evening with many Dutch artists and DJ’s. It’s a mixed gay crowd, trying to survive the hangover and celebrating the last day of the Amsterdam gay pride.

There will be an alternative closing party at the Blauwe Theehuis in the Vondelpark.

Everyone knows Vincent van Gogh cut of (part of) his ear. Van Gogh’s mental health shaped his life’s work and the new exhibition: ‘On the Verge of Insanity’ looks at this for the first time.

On display are 25 of his paintings alongside doctor’s reports and accounts of the infamous incident. Specialists will then attempt to diagnose his condition and discuss it’s role in creating some of the world’s greatest art.

The special 2016 exhibition is on display in the Van Gogh Museum in Amsterdam from July 15 – September 25.

Would you like a guided tour in the Van Gogh Museum? Please contact us for the options.

If you love cats, make sure to visit the following places:

The Cat Cabinet was founded in commemoration of the ginger cat John Pierpont Morgan (1966-1983). This special cat was the stubborn, headstrong companion of the museum’s founder, Bob Meijer.

Cats have been a favorite subject of artists for many decades, and many big names in the art world have produced impressive works on them. Find out more about a few of these painters, including Sal Meijer, Leonor Fini, Théophile Steinlen and Henriette Ronner-Knip.

The collection of the Cat Cabinet offers a wide look at the role of the cat in art and in culture through the centuries.

This special cafe in Amsterdam West has 8 real cats, lovingly selected from shelters. The space is fully furnished for the cats. It is a cat mecca for the 8, they don’t lack anything.

The concept of “cat café ‘originated in Taiwan in 1998 was then very popular in Japan. In cities such as London, Paris, Berlin, Copenhagen and New York, thousands of people visit every day a cat café for a cup of tea and a hug.

In the summer of 2014 claimed Lenny Popelier (32) a successful crowdfunding campaign and achieved thus 33,000 euros to realize its concept in the Netherlands. A total of 975 enthusiastic funders have the amount brought together. With the opening of Cups is the first cat café in the Netherlands and an event in Amsterdam.

Customers pay 3 Euro entrance fee and can then 2 hours indulge themselves with a ‘catuccino’ closeby. In addition to cakes and other sweets will be served a simple lunch. To ensure Cups remains a paradise for both cats and guests, there are clear house rules.

Open from Wednesday-Sunday between 10 AM – 7 PM.

Amsterdam is in 16th place on the list of travel destinations in the world by the US magazine US News & World Report, known for its consumer surveys. The Great Barrier Reef in Australia is the number 1. Paris stands in the rankings at number 2, followed by the tropical island of Bora Bora (French Polynesia). The editors analyzed 250 destinations, which were taken both the opinions of experts and tourists.

Amsterdam is particularly praised for its versatility. “Do not believe everything you hear about Amsterdam,” says the magazine, referring to the sex and drugs image of the capital. “Amsterdam attracts many young men, but is also ideal for a romantic getaway or a sound educational tour with the kids.”

Apart from the 16th place in the general list, Amsterdam is also put at four in the list of best spring destinations. “From cycling along the canals to the Van Gogh Museum Amsterdam fulfills many different travel preferences,” said US News editors.

Would you like to make the most out of your stay in Amsterdam? Book a private tour with Amsterdam VIP Tours! Please contact us for a personalised itinerary.

Every 3rd Sunday of the Month, the Museumplein will be filled with stylish stands full of design. In between the main museums around the pond you can meet the (Dutch) designers yourself, shop for their products and enjoy the great food and atmosphere.

Watch the AccesART movie made on March 20th during the Museum Market!

It is a very special experience to overlook Amsterdam old town from high above. This is now possible when you climb the Wester and/or Oudekerk tower!

The Zuiderkerk tower is closed at the moment for renovation.

Tickets can be bought at the towers. Based on first come, first serve. Purchased tickets are only valid on the same day and time and cannot be changed. All towers are closed on Sundays.

Would you like a private tower tour (max 6 people)? Please contact Amsterdam VIP Tours for the options.

Tower House rules:
– Entering the towers is at your own risk.
– The towers can only be climbed when accompanied by a guide.
– The maximum group size is 6 persons.
– Children have to be at least 6 years.
– It is not allowed to smoke, eat and drink in the tower.
– Pets are not allowed.
– It is not allowed to take luggage etc. during the tour.
– For your luggage is a separate locked cabinet.
– You should always follow the instructions of the guide.

For 3 days many hidden gardens in Amsterdam will be open to the public!

Hidden behind the stately façades of the houses along Amsterdam’s canals lie some of the city’s best-kept secrets: private gardens. The 3rd weekend in June (17-19 June) you can look behind these impressive canal-side homes from 10.00 AM – 5.00 PM. Step into a completely different world; a quiet green oasis.

The three-day-pass (passe-partout) is valid for all particpating gardens during the event.Advanced booking until June 16: € 18.00 via Webshop of Museum Van Loon. Bought at the door:  € 20,00. On the Three Day Pass you will find all garden addresses with a brief description and a city plan. 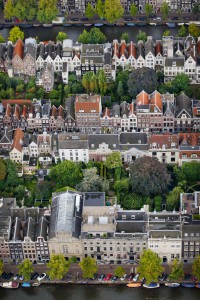 The 4th of May Amsterdam has the national memorial of World War II.

The 5th of May we celebrate our liberation. This year that was 71 years ago. A covenant ponte bridge over the River IJ central Amsterdam Noord for the hungry people to get out of the city and get proper food. It was the only physical connection ever.

On 5 May 2015, the bridge was supposed to be constructed, as a temporary monument to commemorate the wartime Amsterdam and on the occasion of 70th anniversary of the liberation of the Netherlands. However due to weather conditions this was not possible. That’s why this will be done on 5 May this year, between 2 and 5 PM. Only accesable for those the 6600 people who got a ticket for this special event. But certainly a special sight.

Across the Northern IJ shore a Freedom Food is organized for a thousand men. And there’s a farmers market. As a chef with the help of a historian will cook dishes from World War II.

In the last year of World War II there was a big shortage of food. According to the Amsterdam 4 and 5 May Committee drew townspeople moved the city to surrounding farms to exchange their last possessions for example a sack of potatoes. From Amsterdam they walked across the pontoon bridge, to Waterland and even West Friesland.With more than two hundred programs stood on 4 and 5 May in the Second World War. The pontoon bridge over the River IJ is centerpiece of commemorations, open houses, freedom meals and Liberation Festivals in the city. 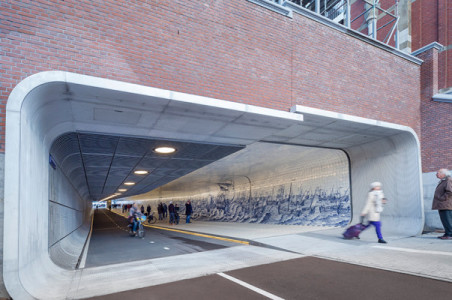 In November 2015, the Cuyperspassage bicycle and pedestrian tunnel at Amsterdam’s Central Station was opened. With 80,000 Delft Blue tiles, it is one of the most beautiful pedestrian tunnel in the Netherlands. The tunnel measures 110 meters in length and 3 meters in height. Connecting the city to the IJ river behind Central Station, the tunnel is used by 15,000 commuters daily. Making it easier for the people that arrive on the frequent ferries behind the station (from the North), to enter the city center.

The tunnel is decorated with a spectacular tableau of hand-shaped tiles. It’s inspired by a restored work by Dutch tile painter Cornelis Boumeester, whose works depicting of the warship Rotterdam and the herring fleet is part of the Rijksmuseum collection. The original crest on the stern is replaced with the Amsterdam coat of arms and vessels, waves, seagulls and herring busses are added.

Dutch ceramics company Koninklijk Tichelaar crafted the 46,000 wall tiles for the tableau as well as 33,000 tiles for the floor. Each tile is made in the traditional Dutch tile size of 13 x 13 cm, recalling the safety and warmth of a traditional Dutch domesticity. Making it worthwile to walk up to the tunnel to admire it! You can find it on the left side of the station, near the 3 story high bicycle garage.