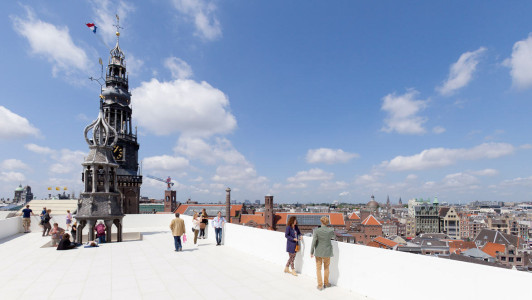 For a couple of months Amsterdam gets a high viewpoint from a very unusual spot: on top of the Old Church, the oldest building in town. The Japanese artist Taturo Atzu built a large panorama terrace around the towers of the church. The opening is controversial, since locals fear for damage of the building.

Through a massive scaffolding built around the church, visitors can reach the roof and touch it’s towers. The idea is that visitors to the terrace are aware of their heritage. “Because the city is densely populated and has little room, I wanted to create this large, open space, so that people see their environment from a different perspective,” says the Japanese about it.

According to the Foundation ‘The Ancient Church’ there is no reason for concern. Because of the cooperation with the renovation architect and a structural engineer. The project is continually monitored.

The Volendammerday is an annual cultural event in which the past, present and future of the world famous village of Volendam is celebrated.

Two days in which the inhabitants of this municipality and interested people from outside are welcome to take a look at the ‘Volendam kitchen” as we say here. This cuisine is a blend of culture, art, sports and music.

The entire weekend will be dedicated to Volendam. The diverse program offers something for everyone. Young and old will be able to enjoy themselves, on and around the port and the center of Volendam. Local website:Vollendammerdag.

Within a few decades, half the houses in the citywill be heated using ‘waste heat’. That’s energy that have large companies waste and now will be used.

The ambition is to have half of all homes in the city in 2040.

Critics are worried that this will cost more money then it saves. Not because the energy itself is more expensive, but because you’re stuck in an energy company like Nuon. With this system you can not choose and change company, so that can be costly. “

The council has already approved the sustainability of the plan.

The oldest market of the city today celebrates its 130th anniversary. The flea market at Waterlooplein officially began on June 8, 1885.

Meanwhile, the famous venue has 300 stalls you can go six days a week (closed on Sundays). Originally mainly Jewish merchants traded their goods in the square. After World War II stallholders benefitedof the high demand for secondhand goods and in the sixties and seventies, the market was very popular with hippies.

The market traders had to move elsewhere in 1977 because of the construction of the  town hall and operahouse. Eleven years later they returned. The festival is celebrated with street theater, music, photos, stories from the old days and activities for children.

This summer there a photo exhibition about 130 years old Waterloo Place in a pop-up store in the Houtkopersdwarsstraat. According to Anne van den Brink, straatmanager from Waterloo, is the combination of market stalls and stuff that are displayed on street special. “It gives the Waterloo market to casual, cheerful-chaotic atmosphere where both tourists are fond of.” 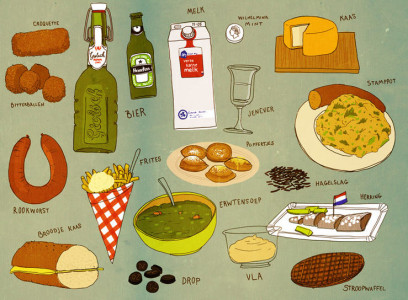 There will be two hundred per day in the city, buses full of tourists. The busses have only designated roads that they are allowed to use. Because of the huge crowds that it entails, there are plans to keep the buses from the citycenter.

The coach sector sees nothing in those plans. “It’s hundreds of millions that the city gives to tourists revenue and also for employment, it is very important that coaches just come because it is the most efficient way to transport large groups of people,” says Carlo Kahn FNV Bus. Also Benno Leeser, owner of tourist hotspot Gassan Diamonds, believes that the exclusion of buses will cost the city a lot of money.

The city already struggles for a long time with the huge crowds and the balance between local life and tourism. The decision on the exclusion of the coaches must be submitted to the citycouncil. When a decision is taken is not yet clear